I just learned about a new crochet stich.  it's called a crocodile stitch.  I don't remember seeing it before, but I maybe have .. it's just that it's striking me as interesting now.

This person shares a pattern for a free scarf - I think this would make a great Special Olympics Scarf don't you?

She even includes some links for youtube videos that demonstrate the pattern.

Email ThisBlogThis!Share to TwitterShare to FacebookShare to Pinterest
Labels: crochet

I've been a little lax in sharing the photos of my completed scarves, but I do have two more finished, and one more nearly finished. 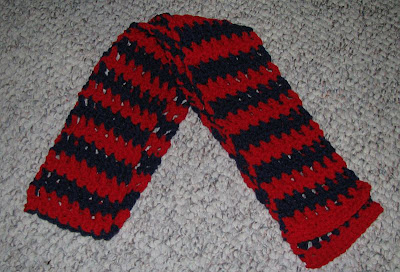 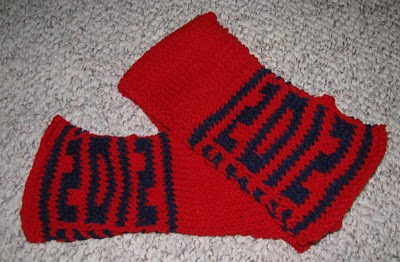 I'll try to post the chart for you soon.
My mom has also done a scarf (two actually, I only have a photo of the one .. ) 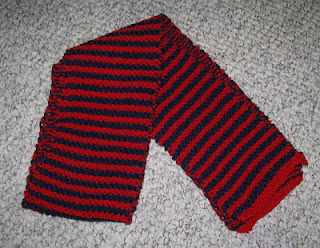 This is mom's scarf. I think she did a great job!

Any guesses on how many scarves I'll have completed before the January 1st deadline?
at 3:00 PM No comments: Links to this post

Well the last few days / week / have been filled with a few things.  My father-in-law came to visit from New York, and then overlapping with that visit was a visit from my parents (from Iowa).  Both visits were very good.  I enjoyed talking with them, and listening to them talk to dh.

I was able to sit and knit with my mom.  It's always a good thing to do, and probably one of my favorite things to do with my mom.  I have completed 2 more scarves for the Special Olympics project, and will share those pics in another post.

I've been reading lots as well.  I finished Blue Eyed Devil by Robert B Parker.

Here's the list of the McKettrick's Series.
(I've read all those in purple.)

I'm really looking forward to learning more about this family, and the Creed family. :)


Have you ever had a series that you just couldn't stop reading?
at 3:56 PM No comments: Links to this post

Email ThisBlogThis!Share to TwitterShare to FacebookShare to Pinterest
Labels: books

So I checked out over 20 books I think .. can't remember.. several are redy to go back.  I suppose there were a few dvd's among that checkout list .. but only a few.

This weekend I've read "Resolution" and "Brimstone" in the Robert B Parker "Appalossa" series.  Good books.  A little dry .. very western .. but they are keeping me interested enough to finish the series .. I have started the last one "Blue Eyed Devil" ... should finish it tomorrow I would think.

As for the McKettrick series .. I read "A McKettrick Christmas" which was a story about one of the kids which appeared in one of the first three books.  Since the others in the series appear to be more decendants of the ppl in the first 3 books, I figured popping up to this one would make sense chronologically.

What have you read lately?
at 4:43 PM No comments: Links to this post

Email ThisBlogThis!Share to TwitterShare to FacebookShare to Pinterest
Labels: books

Have you ever got to reading a book series, and wanted to read the whole series, so you end up with 20 books on hold at the library?  No? .. Well, I admit it, I have 20+ books in my hold list at the library, and most of them are Linda Lael Miller books.

A friend of mine got me started on the McKettricks series.  The books are:

I also have some of the Creed series in my hold list.  As well as My Darling Melissa which is one of the first few books she wrote, which I believe is totally unrelated to either McKettrick or Creed series.

You can see all of her books listed here.

In the meantie, I'm also halfway through Brisingr of the Eragon series .. and I have the 2nd 3rd and 4th books of Robert B Parker's    Virgil Cole/Everett Hitch Series.  I enjoyed the book Apaloosa, but not so much the movie.  These three books are actually due in a week, so I really need to start reading if I'm going to finish them and move further into the McKettrick series.

So many books, so little time!