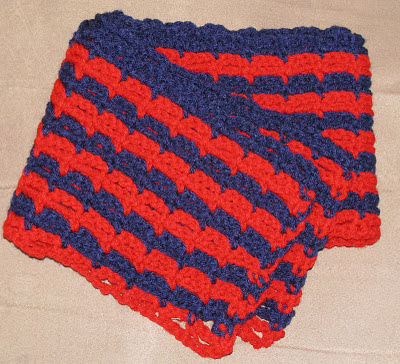 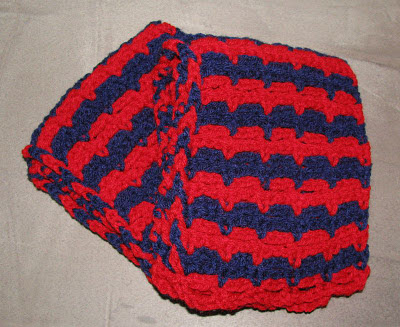 I don't have enough yarn for another whole scarf, but I suppose I might get scraps from one of the other people in my group working on these.  I do have 3 granny squares plus a small ball of the blue. May save these for our next charity project - not sure.

and I know others are working on finishing theirs .. atleast 4 more that I am pretty sure will get finished.  We do have another month before we can mail these, as Wisconsin Special Olympics wants them sent after Jan 1st, but get there before Jan 21st.  So I'm aiming to mail these by Jan 4th.

I got this from another blog .. What do you think .. isn't it neat?

Do you remember when we would fold a reader's digest or tv guide to make a turkey centerpiece?  I've looked online for a picture, as I don't have one, but the only thing I found was these simple directions - no picture though.

If anyone has pictures, I'd love to share them! :)

I've also seen in the neighbor's yard, how they made a turkey out of a uncarved pumpkin.  they have cut wedges from wood and painted them, and stuck them into the pumpkin, and then also cut and pained a turkey head from wood and attached that to the front of the pumpkin.  Pretty neat!

Email ThisBlogThis!Share to TwitterShare to FacebookShare to Pinterest
Labels: Thanksgiving

I've finally finished that Special Olympic Scarf with the cable running up the middle.  This is number 11 for me! :) 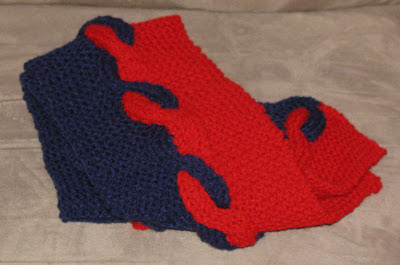 It's pretty neat, but was very slow! I finished it a couple of days ago ...
I immediately started on the next one, which is a pretty simple knit pattern.
CO 19 (probably should have done just a couple of more, it's a bit narrow than it should be.)
Knit 5 rows
Purl 1 row (or knit left to right - backwards).
I added blue in the middle for a small section.

Here is the result .. took me about 3 days and is number 12 !  Finished it yesterday. 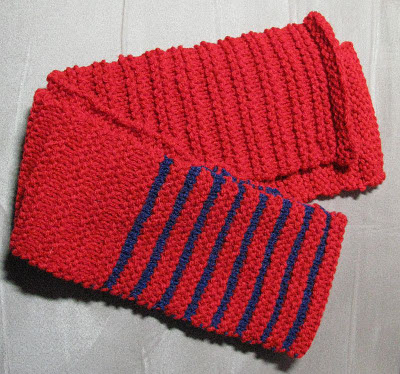 Then of course I had to start another, because I'm still not out of yarn, and so I decided to do a Crochet Lemonade Stitch and alternate blue and red .. and it ended up a bit narrow so I added a simple chain border all the way around..... 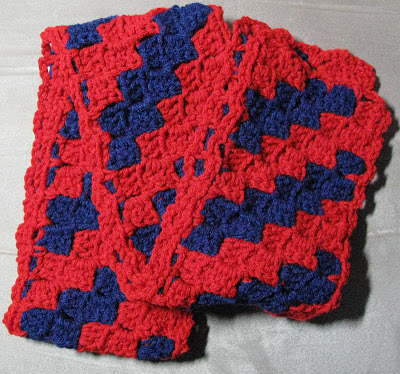 I have started #14 as well.  It's crochet as well, and is chains held together by sc every 4th stitch.  I didn't get a picture of it yet, but it's about 1/3 of the way done .. worked on it a bit last night.  It won't be as heavy as the others, but I think it will be a neat effect.

We had the Knit & Crochet group meeting yesterday afternoon, and FH presented this scarf.  It's the second she's made.  She's doing a great job! :) 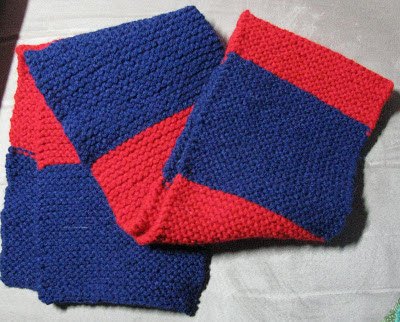 I've started bagging the scarves that I've made and collected, and we are filling a box! :)  I'm starting to wonder how much it's going to cost to mail!  I'll have to weigh and measure it soon so that I can suggest to the group the possibility of them helping to pay for postage.  I don't mind paying myself, but since it is a group project, then perhaps they would like to contribute a dollar or two towards postage.

Any thoughts?
at 9:04 AM No comments: Links to this post

Hi :) I have a few things to share today. 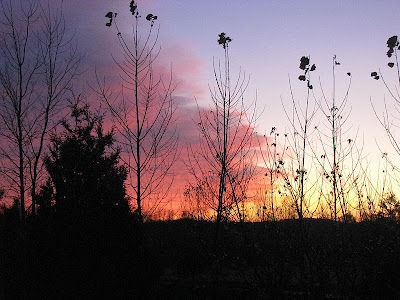 So pretty.  We've been having a lot of really pretty sunsets lately.  I love how the silhouette of the trees play against the pretty colors of the clouds... :)

Here's a funny sight I saw this past week.  Peaches and Joel were both just laying on the living room floor.  Peaches tends to follow Joel when he's home. 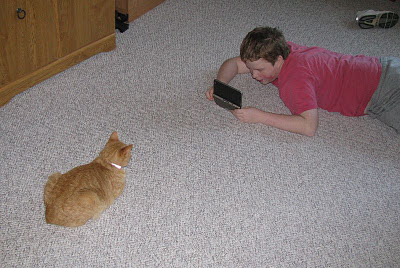 I also started making my first basket on my own.  Not sure how it's turning out .. I haven't done any more than what the second picture shows .. hopefully it will turn out alright.  I am going to try to work on it today ... 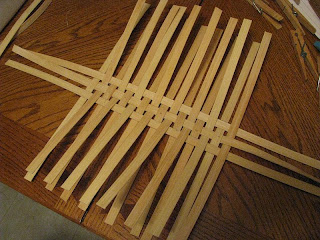 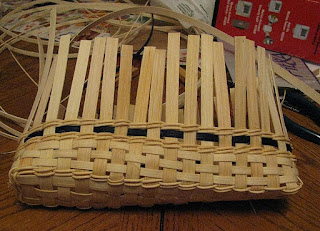 As you in the US know, we had an extra hour on Sunday morning because of Daylight Savings Time ending.  Some people used that hour for sleep, but Joel wanted to make pancakes before church.  So he made us pancakes! :)  I put some bacon in the microwave and we had a delicious breakfast before heading out to church.  It was a treat to have someone else tend the pancakes so that I could eat with dh instead of being the last one to eat or eating standing up by the stove.  Great Job Joel! :) 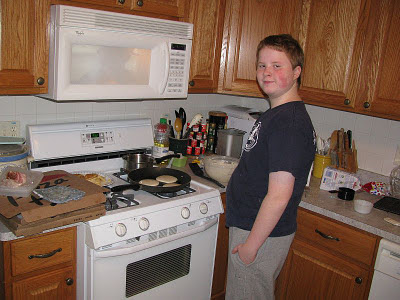 Here is Peaches under the quilt last evening. 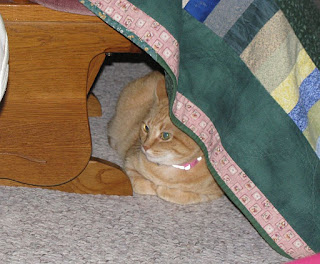 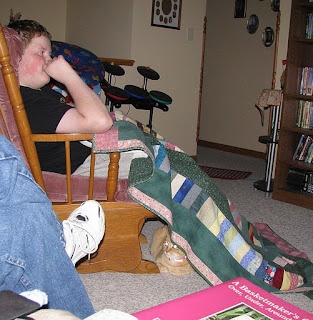 She and Joel stick pretty close together!  It was cute to see her peeking out from under Joel's lap quilt!
at 9:44 AM 2 comments: Links to this post

I know this is a long shot, but I have to try.  The Banner I made and showed you in this post is now missing.  On Friday night we got a gps unit stolen from the van in our driveway .. and then yesterday (Sunday) we noticed that my Snow-Family Banner was missing.  I am most concerned with the Banner, as I worked very hard on it and put a lot of love into making it.

If by chance you see it, please contact me. 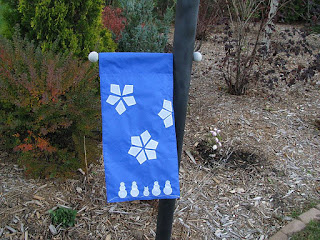 What company can you order from online and receive the product less than 26 hours later?

I submitted my first order for reed & handles for my basket making adventure Yesterday before noon .. and I received my box of supplies just a little bit ago .. that's less than 26 hours from order to delivery!  Wow ! 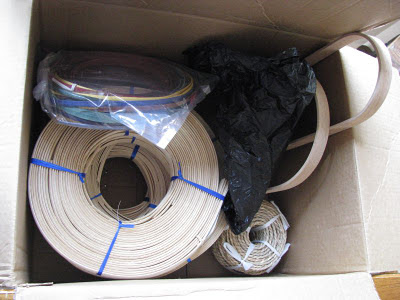 Catching Up, Halloween, and Crochet Mitts

Hallo! :)
I have a few things for you today.  While we were outside trying to get the yard ready for winter, I noticed this flower was just now blooming.  Do you happen to know what it is?  I don't think I've seen it before.  It's very pretty, and I do hope it grows more next year ... it's kind of spindly right now.  If I know more about it, then perhaps I could do something to help it grow. 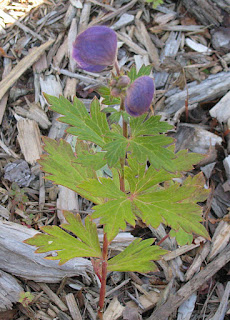 We had Halloween/Beggar's Night this past Sunday.  Where we lived in Iowa, we lived on a street that did not get many (say zero) trick-or-treaters.  So this year, we had no idea what to expect, but figured we'd buy some candy and see if anyone came.  We did make sure to buy what we liked, however! :)  Just in case ya know! Some of the candy is in these pumpkins....If I remember right, my sister, S, made them a long time ago. 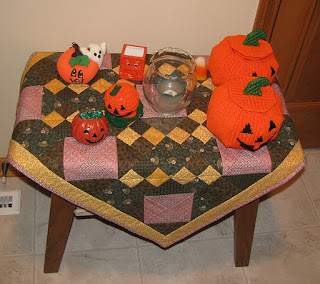 So we handed out candy, rather Rob & I did, the boys were busy on the computers ... 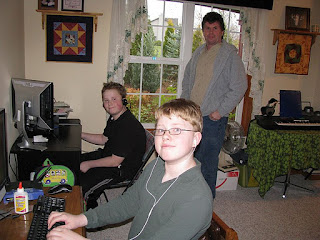 You can see it's still light out.  We got home from getting our pictures taken and shopping at Walmart at 4:05 pm ... Beggar's Night was from 4-7 .. so we hurried to get the cold stuff put away, and get the bags of candy opened... and we were open for business!  We saw lot's of hobos and ninja's and princesses .. a Darth Vador and a Luke ... a cute pumpkin, a couple of cowboys, the grim reaper even came for a visit .. but was very nice about it! lol Must have been the chocolate they went away with!... It was a nice night.  By 6 is was mostly done, and by then it had started to rain .. only a few kids braved the rain from 6-7 .. so that was good.  I think Rob and I both had fun.

Last week on my internet meanderings, I found this blog post showing a pattern for crocheted fingerless mitts using sock yarn.  I thought they were neat, and I have some sock yarn that is just sitting in a drawer, so I decided to try them out.  Here's a couple of pics for you. 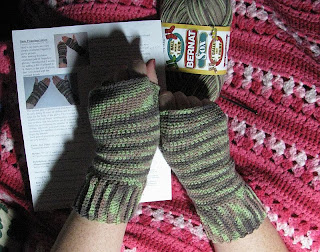 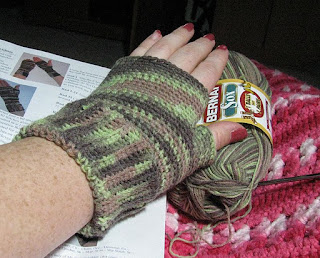 Overall I liked the pattern.  Crocheting at that small of a gauge does take a while though! lol.  I finished the second one last night.   As you can see I used Bernat Sox yarn in a camo variegation.  I used 40 rows of ribbing, which translates to 40 sc around the wrist and up through the hands.  After the thumb, I decreased to 38 sc around, and did 13 rows of sc above the thumb.  I also adjusted the thumb a bit by doing two decreases on each of rows 3 and 5.  Seemed to work well for me.
The main body of the mitt is nice and snug, and it even works well on my dh and ds1 and they have smaller hands than I do.  I like my mitts snug though, so I think that's OK.  Not sure if they would like snugger mitts or not.  They are also nice in that with the sock yarn they are thinner, which means you can wear them inside by themselves, or you can put them on underneath other gloves to go outside and shovel snow.  I almost always double-glove when spending quantities of time outside in the winter. Especially while shoveling.
The one thing I'm not sure I like is that the ribbing is quite loose.  As you can see it easily flipped up over my wrist, which isn't a bad look, but doesn't keep your forearm warm.  If I was to do these again, I would decrease the ribbing rows, but keep the 40sc around the main body.  But I do recommend this pattern .. and the blog site!  She has lots of great ideas!  Thanks Cindy!
Today I think I'm going to bite the bullet and order some basket making reed.  Here's hoping! :)
at 9:26 AM 1 comment: Links to this post